This cake is a “must have Christmas cake” for Mr. Photographer. At least that’s what I was told by his Mother shortly before our first Christmas as newlyweds. As a consequence, not even three months after the wedding I found myself standing in the kitchen with Mom, who took it upon herself to teach me how to make it. I was terrified. I was way too young, haven’t had too much baking experience under my belt yet, and I was convinced she was going to watch me like a hawk and would ultimately deem me totally incompetent and unfit to properly care for her only son. What can I say? Insecure and paranoid young daughters-in-law don’t make it for their mothers-in-law any easier 🙂

I had trouble with everything that night: First I couldn’t roll out the dough, then I couldn’t get it onto the baking sheet. When it finished baking, I handled it too hot and it broke in two, and I had more than a few lumps in the frosting. But at the end both me and my new Mom-in-law made it through, she told me I did great, and Mr. Photographer was happy to have his Christmas cake.

Let me make something clear: Mom is great, and I’m not just saying that because there is a slight chance she might read it. There are tons of in-laws jokes built around the idea that the farther they live and the less you have to see them the better, and I suppose such jokes exist because they mirror the experience of many. I don’t have your typical harsh and less than helpful mother-in-law though. From the get-go she took me as her own, which also means that if she thinks I didn’t do something right or plan on doing something less than smart she has no qualms about telling me that. As a young wife I remember wishing she wouldn’t be quite so open in voicing her opinions and wanting her to keep a little more distance in our relationship. But you know how the saying goes – be careful what you wish for, because you might just get it. These days the distance between us is many times more than what I’d prefer, and I often find myself wishing she’d be just a little bit closer than twelve hour flight away. Over the years I came to appreciate her openness as well – she doesn’t leave me guessing and I know that what she says to me is (mostly) true 🙂

A lot has changed since that first baking session with Mom. I’ve had two babies on my own, and I’m convinced God must definitely have a sense of humor, because he gave me two sons – so that I could one day experience first-hand that being a mother-in-law to the woman your son chose to marry is not exactly an easy task. We still have our differences, Mom and me, but we’ve learned to live with them for the most part. And after surviving teenage years with my older son and being in the middle of said hell with the younger one I only feel grateful to her today. I’m glad she gave birth to Mr. Photographer and that she didn’t kill him when he was fifteen. And I’m also immensely thankful she taught him how to clean the kitchen 🙂

The honey cake I’m presenting to you today is not the exact recipe Mom makes. After Mr. Photographer found out he needs to avoid gluten, we thought he might never taste his favorite cake again. Mom’s recipe calls for four layers of rolled out honey dough, and since gluten-free dough lacks gluten, the very thing that holds the dough together, it is inherently non-stretchy and very hard to roll out. After much thinking, digging and comparing recipes I came up with honey cake that uses batter instead of sheets of dough. The batter is thinner and doesn’t need to be rolled out, and I’m happy to report this recipe works in both gluten-full and gluten-free version. I’d even dare to say it’s better than the original (sorry, Mom!), because this cake is soft right away and there is no need to wait for the cake layers to soften under the frosting. The gluten-free cake turned out to be just a little softer and more porous than its standard gluten counterpart, but since gluten-free dough can often be somewhat dry and crumbly, I’ll take softer and more porous any day! The Caramel Buttercream requires a little planning, because you need to caramelize sweetened condensed milk the night before, but it is worth it, the frosting is finger-licking good!

Beware: This cake is dangerous. It literally melts in your mouth and I guarantee you won’t be able to eat just one slice. I hope you’ll enjoy it as much as we do around here! 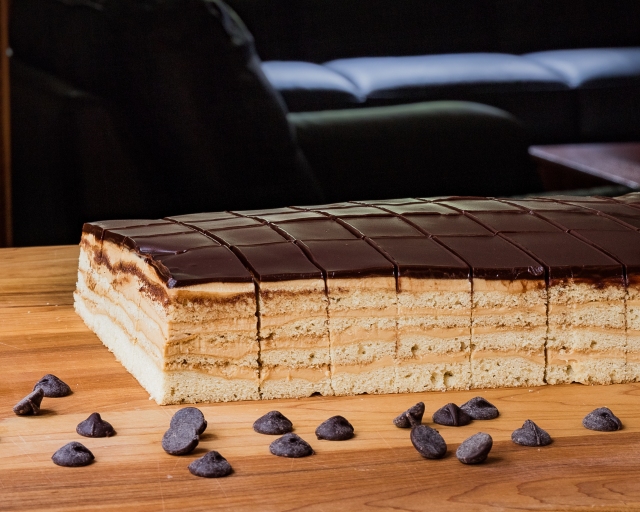 To make the cake gluten-free, I subbed the all-purpose flour with gluten-free flour mix. I used Namaste Perfect Flour Blend, but I imagine any good quality flour mix would work. Please check if your blend contains either xanthan or guar gum, and if not, add roughly 1 teaspoon of xanthan/guar gum per cup (130 g, 4.5 oz.) of flour. The gluten-free batter was different than the standard gluten cake – surprisingly it was thicker and not as spreadable, but since I knew that gluten-free flour is lighter thanks to the starches I was hesitant to add more milk than the recipe calls for. As a result, spreading the batter onto the paper was a little harder; I ended up dipping the spatula in water to help spreading the batter onto the paper, just like I do when baking pizza dough. The gluten-free cakes also baked a little slower and it took them about a minute – minute and a half longer to reach the nice golden color – I suppose that would depend on the grains/starches used in your mix. And lastly, the gluten-free cake layers were rising  unevenly in the oven, forming big bubbles in the cake :-). I was convinced the cake was doomed, but I pricked the bubbles with a fork when taking the cakes from the oven, and after they cooled they looked pretty good, so all was well in the end :-). The gluten-free baking is always an adventure! 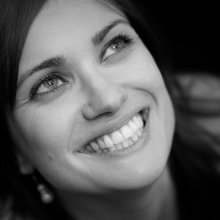 I'm Daniela, and I'm addicted to all things culinary. The kitchen is my playground, and when I'm lucky, I am able to get my husband David (a.k.a. Mr. Photographer) to join me in my creative endeavors. This site was born out of our love for a good food, and a desire to chronicle our culinary adventures together. Roll up your sleeves and join the fun, we're happy to have you!